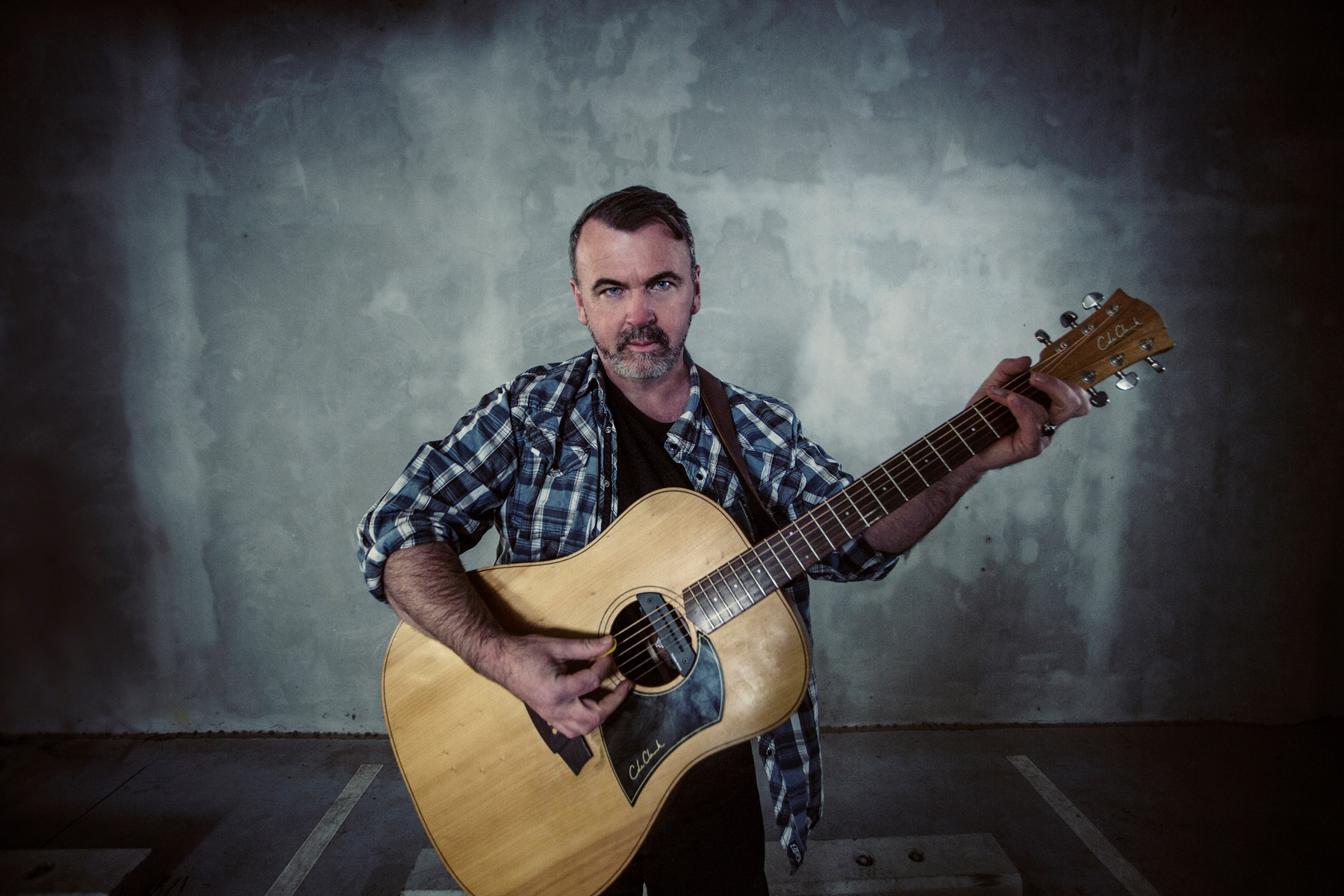 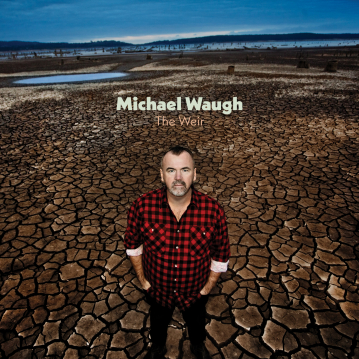 Michael Waugh’s new album The Weir reaches up from the dried, cracked heart of Gippsland’s irrigation reservoir – Lake Glenmaggie – asking what it means to grow up Australian. It is family ‘carguments’ on long holiday drives to see the big things of Australia, mozzie-bitten itches of first summer loves, Meldrum-fuelled familiarity of Aussie rock classics, and the lived-in love of dinner with your partner in front of Neighbours. But it is also about what lies underneath – our underbelly laid bare by the drought; the distances that drive us apart, the economic devastation of rural communities, the death-wish of boys in country towns, the spectres of colonisation, racism and homophobia.

The Weir is Michael Waugh’s third album. It follows The Asphalt & The Oval (winner 2018 The Age Music Victoria Awards ‘Best Folk and Roots Album’) and 2016’s What We Might Be (Golden Guitar Award nomination 2017) and is Michael’s third studio project with multiple ARIA and Golden Guitar award producer winning Shane Nicholson.

“When Michael Waugh opens his mouth, you should listen”.  Andrew McMillen – The Australian

“The Weir” is a lyrical and musical tour de force… these songs have few equals in the current Australian music scene.” Eric Bogle

“Another masterclass in songwriting from Michael Waugh” Shane Nicholson

“In the cracked earth of The Weir, Michael Waugh has unearthed rare treasures indeed.” Colin Buchanan

Award winning singer-songwriter Michael Waugh takes the best bloody pies in the world to the cracked heart of Lake Glenmaggie in his new album, The Weir.

Meredith O’Shea’s cover photograph for Michael Waugh’s new album The Weir shows the cracked patina of red dirt at the thirsty heart of Gippsland’s Glenmaggie Weir. The Weir – the irrigation reservoir serving dairy farmlands throughout the Victorian town of Maffra, 220 kilometres east of Melbourne, and it’s surrounds, is at 13% capacity. There’s a distant suggestion of water on the horizon and the promise of rainclouds overhead.

Michael Waugh is at the centre of it – singing about his national identity, paying tribute to the Weir – that place where all of the rivers return, dusty with ghosts of his ancestry, memories of his childhood, and reflections of his manhood.

The Weir is Waugh’s third album and follows the critically acclaimed The Asphalt & The Oval (winner 2018 The Age Music Victoria Awards ‘Best Folk and Roots Album’) and 2016’s What We Might Be (Golden Guitar Award nomination in 2017).

It’s also Michael’s third studio project with multiple ARIA and Golden Guitar award winning singer-songwriter Shane Nicholson in the producer’s chair. Their reference points throughout were the songs and artists that have defined the Australian sound – our musical voice.

Nicholson, an accomplished multi-instrumentalist, played all of the instruments on the record with the exception of violin, for which he enlisted the legendary Lindsay Martin. Felicity Urquhart and Lyn Bowtell (from Bennet, Bowtell and Urquhart) feature on background vocals.

Michael reflects on the recording process:

“As a songwriter, there is no greater joy than to hear Shane Nicholson play something that I wrote. This time around we had a stronger concept and a bolder vision for the album – we spent more time and had more fun experimenting with sound.

I think that you can only take those types of creative journeys with a really trusted friend. Shane has always been so conscious of serving the story of the song – and I really believe that on this record he stretched himself.

And while I loved every moment in the studio – I think I was most excited about the sessions with Felicity and Lyn. Those women know each other’s voices so well – it reminded me of the McGarrigle sisters or Rose Bygrave and Marcia Howard from Goanna – creating this magic sister-sound.”

The Weir is about growing up Australian. It’s short-story-songs are as pointed and potent with images of Australian life as a Tim Winton narrative.

The album is unapologetically longform. Parenthesised by cicadas, singing the music of our bushland, Waugh paints parochial images of custard tarts served by a woman who call us ‘Love’ at the local bakery (‘The Weir’), fibreglass fruit discovered when we first see our country from the back seat of a car (‘Big Things’) and Aussie rock legends forming the soundtrack to our cultural identity on Sunday night episodes of Countdown (‘This Song Reminds Me’).

There are mozzie bites (and other itches) tempting us to scratch when we meet our first love on beachside summer holidays (‘Seaspray’), distances between each other that we attempt to drive away on those long Australian highways (‘Be There’), and the unsophisticated, lived-in beauty of a relationship that has grown as comfortable as a dinner in front of an episode of Neighbours on a weeknight (‘Like I Used To’).

As the lyrics of the title-track suggests, it is also about the things that lie underneath: the impact of drought and thoughtless industrial change in small country communities (‘Down in the Valley’), the death-wish of disenfranchised youth in regional centres (‘Warragul Police’), the homophobia that shuts down our little boys (‘Mary Lou’), and the shame of our history (’50 words’).

Michael says of the songs

“As a writer, I try really hard to be honest. It’s not always my truth – but there is a truthfulness that I try to achieve. In a song like ‘Born Here’, I was born at 13 Macadam St, Maffra. There was pampas grass in the front yard and a Doberman called Ben. I did split my head open and they stitched me up at the Maffra Hospital.

It’s the same in ‘Big Things’ – I can still picture that car ride through the middle of Sydney, towing a van, with mum trying to read a map by turning it upside down and the stress of a city where every road was going one way in the wrong direction and every bugger was in the lane you wanted to merge into.

Those factual truths become the texture of my songs.

But, in ‘Warragul Police’, it’s different. I wrote that song when I was driving through Warragul and I heard a brief news report about something that had happened to a boy who was the same age as my son. The story is not factually true – but it is about me reaching out as a dad, and imagining the horror of that moment, sleepily opening the door to those shadows through the flyscreen, the moment of wondering what that little bastard’s done – trying, as honestly as I can, to feel what that moment must have been like for that other father, who I’ve never met, at the instant where it all turned into scrambled eggs.

Ultimately, the album is about being lucky to be Australian (‘Born Here’) – but with an uncompromising sting in its tail.”

The Weir is built around a triptych of songs that keep bringing us back to the image of Glenmaggie.

We are taken to summers where we eat the best pies in the world from the Maffra bakery as children dive into the water. Later, in the haunting and suspenseful ‘Search Party’, this motif is twisted into the image of hands reaching up through the mud on a night of Aussie male aggression, the phantom of suicide haunting men’s minds through a fog of stubbies and panic.

The closing track, ‘Last Drinks’, tells of Waugh’s love for his son and his family and we learn how the Weir was built. Poor Irish immigrants to the area (Waugh’s great grandparents) had their farms bought in the 1920s by the state government in a forced acquisition of land. Being the fiery people that they were, they refused to leave – and stayed on the land as the Weir wall was built. Legend has it that the last of them held out at the Glenmaggie Hotel and when the inevitable flood came, and the water finally reached the bar, the bartender called “last drinks”.

At a time when other walls are being built to keep immigrants out, The Weir asks questions about what it means to be Australian, channelling the music of our cultural heritage and stories that embrace the beauty and ugliness of who we were and who we are – reflecting on the edge of the Weir, eating the best bloody pies in the world.

The Weir is out now on Compass Bros Records, through Universal Music Australia.